Skeletons Under the Bed 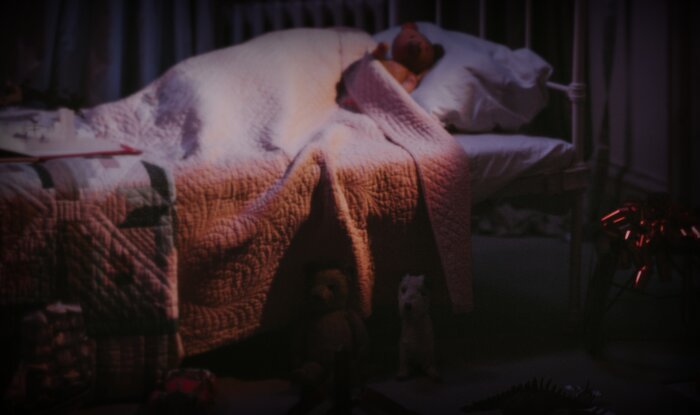 As a child, grown-ups talked about skeletons in the closet. I never understood this because I knew they were under the bed.

In the dark, coming back from a midnight bathroom trip, I hesitated at my bedroom door. Their bony hands ruffled my bed skirt. Reaching. Waiting. Too old to call for Mom to check under my bed, I stood my ground. They would hide from her anyway, somewhere in the deep shadows. Dad said that at eight it was “high time” I got over irrational fears. I came to understand “irrational” meant anything that adults couldn’t explain, so I must be imagining it. Closing my eyes, breathing deeply to still my racing heart, I wished I could imagine them away. My eyes opened and the grasping fingers were gone—at least from sight.

Behind me, harsh snores from my parents’ room offered only mild comfort. It reminded me Dad was near, but it also meant he slept soundly, unlikely to be woken by my muffled cries. They wouldn’t give me the chance to scream.

During the day I would search under my bed. The skeletons didn’t dare expose themselves in the light. But their nightly activities were evident in the chaos of broken toys, a sock missing its fellow, and an apple core—an apple I had only taken one bite from when I knocked it on the floor and it rolled under the bed. Too close to nightfall to risk searching for it, I had abandoned the apple to them.

I took a deep breath and held it a moment to calm my breathing. If my big sister caught me standing in the hall, I’d be in for it. Zoe was a light sleeper, Mom said on account of her illness. Last night, I had left the bathroom light on to illuminate a safe path to my bed. She had stormed out of her room, flipping off the light and ordering me to bed. Waiting until I had dozed off, she snuck back into my room. I can picture her snickering as she’d carefully crawled under my bed, never realizing the danger she had put herself in for the sake of a joke. Her hand had reached between the wall and bed, grabbing my arm. The screams that had woke my parents, Zoe scrambling out from under my bed and covering my mouth to shush me, my dad’s booming voice threatening to ground me for life—I dared not repeat that. Mom’s reassurances at breakfast that I had nothing to fear caused my face to turn hot even now as my sister’s words replayed in my head. “You’re lame.”

Anger burned in my chest as I glared toward Zoe’s open door. She’d slept most the day while I did the chores because I woke her up. Because it was my fault. “If the light keeps you awake,” I had said, “Close your door.” She had just sniffed and called me a “baby” for being afraid of the dark. But I knew the truth—that’s she’s scared too.

Moving like a ghost, I pulled my sister’s door all the way shut. Even with my fear, I smiled. Zoe won’t admit she’s the one who’s afraid of the dark. Darkness was nothing. It can’t hurt anyone. It’s what crept in the dark. Movement caught my eye. Nikki arched her back with a low growl and leaped onto my bed. Even the cat knew better than my sister. Zoe could call me names all she wanted. I dashed across my room and jumped onto my bed, never giving the skeletons’ arms a chance to grab me and pull me under.

Safe. My heart beat. Safe. My lungs breathed. Nikki complained as I hauled her under the blankets and covered us both before curling up in the middle of my bed. Carefully, I tucked the edges of the blankets under me with my free hand. Mom often exclaimed at the state of my bed in the morning, but blankets dangling over the edge of the bed weren’t safe.

Thump. Thump. Thump. I listened to my heart. Thump. Thump. Thump. The heavy beat of music pounded in rhythm with my fear as a car drove past our house. Thump. Thump. Thump. Something tumbled out from under my bed. I didn’t want to look; but as I peered beneath my covers, I saw. A shoe. My shoe. The one I couldn’t find earlier today. Mom had told me not to blame others when I had insisted someone moved it—that it wasn’t where I’d left it. I whimpered and squeezed Nikki tighter. She yowled and slipped out of my grasp, leaping to the floor with a soft, whumph. Her back arched with a wild hiss in the direction of my bed—toward the shadows of death.

I wish you would just hurry up and die! The words that I had let carelessly slip from my tongue returned to haunt me. The look in my sister’s eyes, the expressions on Mom and Dad’s faces. How I wished I could feed those words to the skeletons, like the apple under my bed. Aside from being immediately sent to my room, I hadn’t even been punished, and that made it all the worse. I deserved to be punished. Now as Nikki hissed, I knew they were coming for me.

Nikki scampered out my door, and I was alone. Tears burned my eyes, and my breath hot on my face reflected back toward me as I wrapped the blankets around me like a mummy. Too ashamed—of my words and of my fear—to call out, I clung in desperation to my blankets to hide me. What if Zoe did die? I was tired of her illness. Tired of watching Mom hover over my sister and ignore me, unless it was to give me another chore. I had to “be a big help” Dad said. I just wanted to be a normal kid. A little part of me, tucked away in the corner of my mind, whispered that I was selfish—that my sister had lost as much and more—but I was a child, and sometimes I believed my sister faked being worse off than she was.

Something tugged on my blankets, pulling them where they had come loose and dangled toward the floor. I gripped my blankets tighter about my head and stifled a scream. It’s just Nikki, I repeated in my mind. But Nikki had left. A sharper tug nearly ripped them right off my bed. Screaming, I flung my pillow blindly in the direction my blankets had slid and wrapped myself into a ball, sobbing. Startled screams echoed from my sister’s room. Remember I had shut her in the dark? I waited for the skeletons to come for me, to drag me under the bed into their domain. Or were they going for my sister to punish me for my careless words, that—like a proverb I had learned in Sunday School—what I sowed, I would also reap. Only now my sister would pay for my sins. I breathed a prayer for my sister that wasn’t much more than a short sob.

My parents came rushing out of their room. I heard, rather than saw, for my eyes were still closed, and for once I was not angry that they rushed to my sister instead of me, but I feared what they would find. And I heard them gasp.

That was the night my sister was rushed to the hospital—not for the first time, but the last. That was the night I charged Zoe’s bed with Dad’s flashlight and blinded every skeleton under it. That was the night that we all came face to face with the shadow of death. It later became a big joke. Over the years, Zoe often remarked that I’d scared the illness right out of her. It wasn’t funny, I told her once as we sipped coffee much too late into the evening. She had almost died. Yet, afterward, she’d gradually improved, and the doctors had never quite been able to explain why.

I’m too old, I suppose, to believe in skeletons under the bed, but I think of them whenever my quick tongue tries to shoot off words better left unsaid. And I still don’t let my hands or feet dangle off the edge.

Thank you for reading. If you enjoyed this post, consider buying me a cup of coffee to keep my creative brain cells alive. If you haven’t already, you can subscribe for more posts like this one below. Leave a comment and check out my other short stories.

1 thought on “Skeletons Under the Bed”